Heartworm is a preventable but serious parasite that’s potentially fatal if left untreated. Here's everything you need to know.

Heartworm is a preventable but serious parasite that’s potentially fatal if left untreated.

Though it’s endemic to all parts of the continental US, heartworm is most common in the south and southeastern parts of the country. Adult worms live in the heart, lungs, and blood vessels of affected dogs, causing severe damage to these organs and others. The worms can contribute to congestive heart failure, which often results in death.

Data indicates that heartworm infections are on the rise, both in terms of the number of dogs infected and the amount of the country where it is now endemic. The southeastern U.S. and the Mississippi River Valley continue to be the areas with the highest numbers of cases, but other parts of the country where prevalence was historically lower (e.g. California, Oregon and Washington), have also started to see an increase in cases. 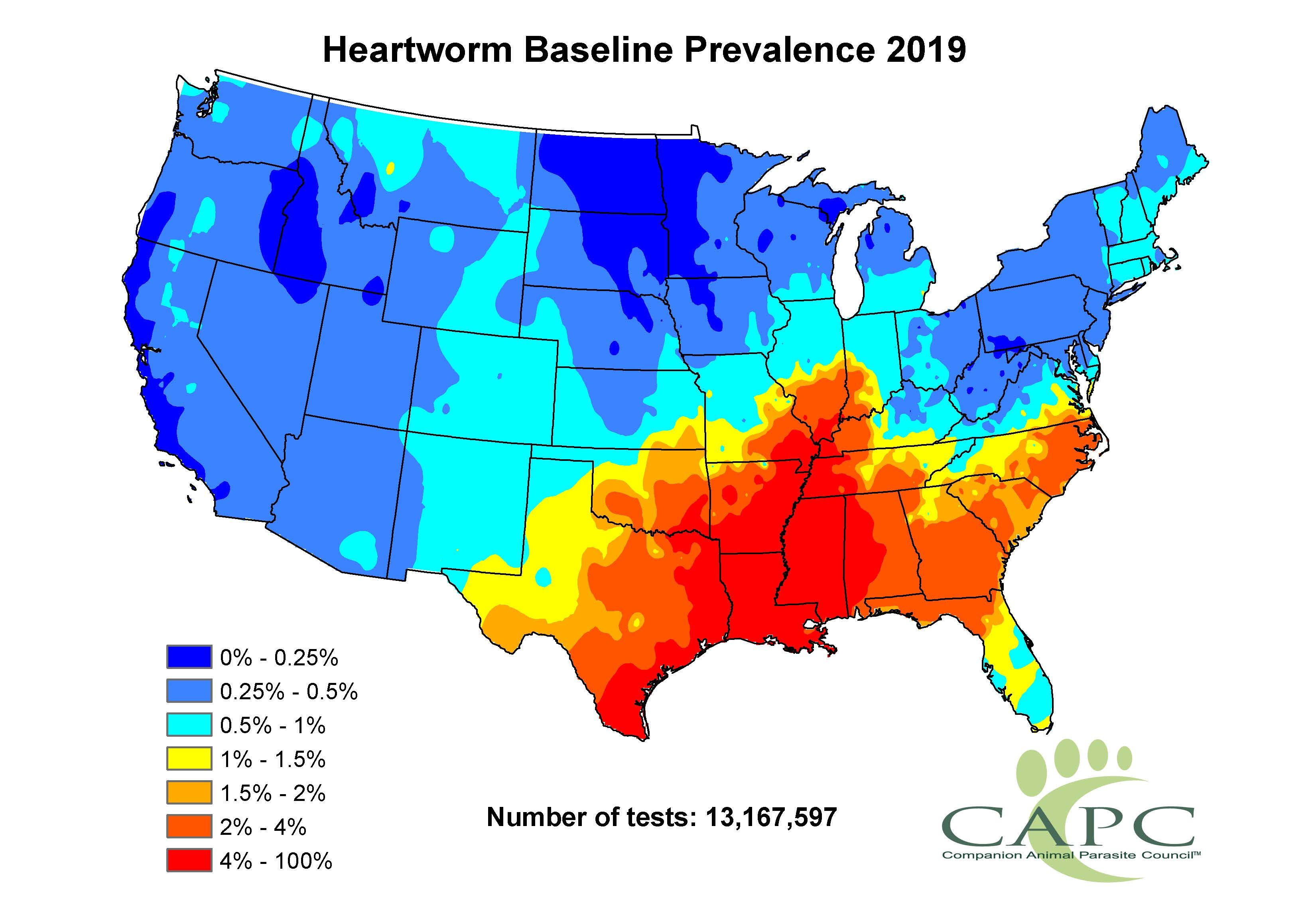 How is heartworm transmitted?

Heartworm is caused by a worm known as Dirofilaria immitis. The microfilariae (larval stage) of the parasite is transmitted to dogs through a mosquito bite - at least 25 species of mosquitoes are known to transmit the larvae that cause heartworm.

When a mosquito bites an infected dog, she ingests blood and immature larvae that are present in the bloodstream of the dog. The larvae mature in the mosquito for 10 to 14 days until they are deposited in another dog in subsequent feeding bouts. The larvae then move through the wound in the dogs’ skin and undergo further maturation into worms. Eventually, the worms migrate to the heart.

The lifespan of the worms in the heart is about 5 to 7 years, with male worms reaching 4 to 6 inches and female worms 10 to 12 inches long. These adult worms release microfilariae into the bloodstream to be ingested by another mosquito and the cycle explained above continues. 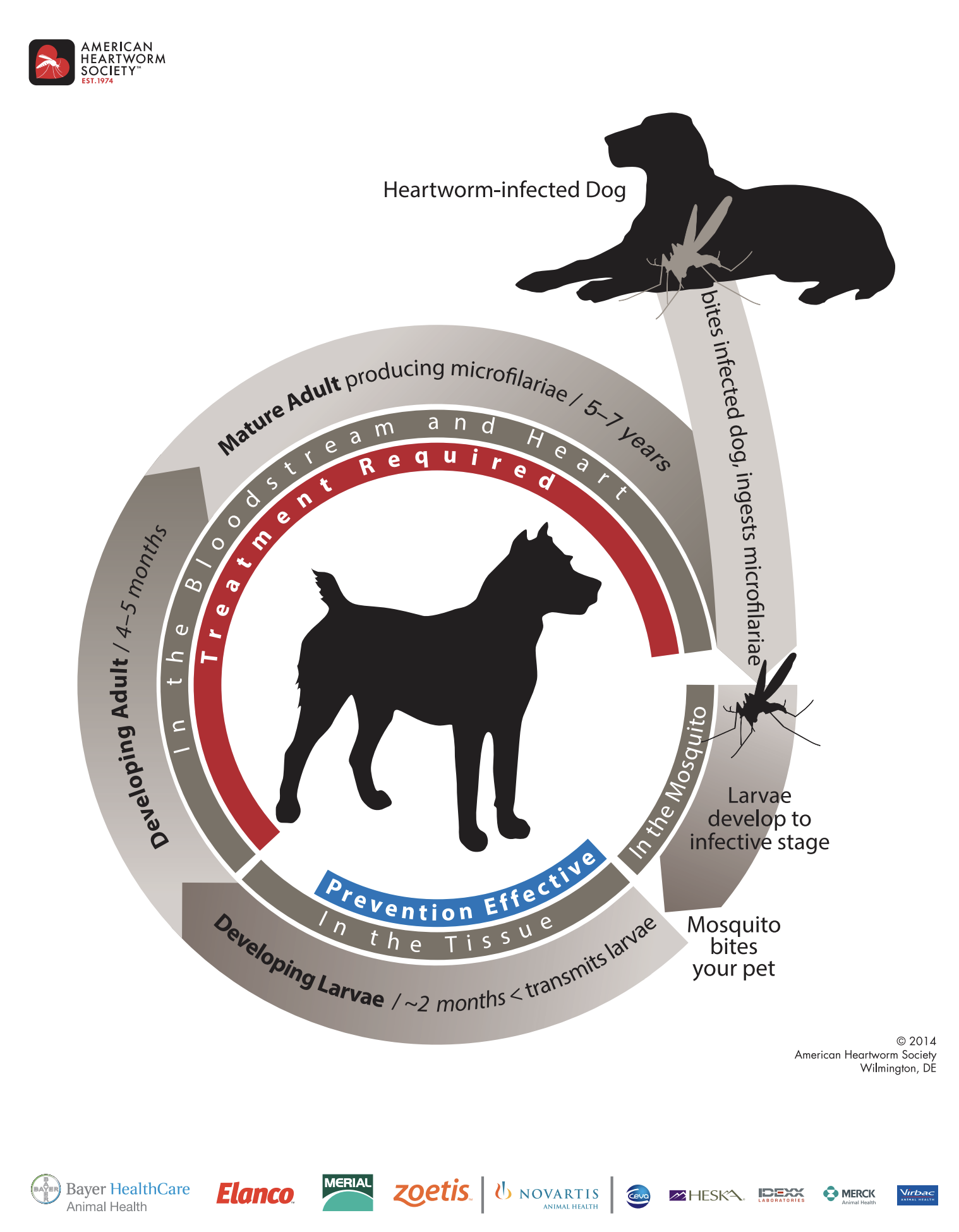 Most dogs are asymptomatic in the early stages of disease but the longer the infection persists, the more likely they are to exhibit symptoms.

Dogs that are very active, have a heavy worm burden (large number of worms), or have other health conditions will show more clinical signs that are more severe. Signs of heartworm disease may include a mild persistent cough, reluctance to exercise, fatigue after moderate activity, decreased appetite, and weight loss. Live heartworms damage lung cells, which activates the immune system and attracts leukocytes (WBCs) and platelets.

Dead and dying worms may cause blood clots (thrombosis), formation of granulomas, a collection of immune cells (macrophages) in an attempt by the immune system to “wall off” foreign material or substances that cannot be eliminated resulting in inflammation. The pulmonary vessels of the lungs become thickened and twisted increasing the risk for ischemic events (strokes).

Caval syndrome (CS) occurs in a small number of cases, and is usually associated with large numbers of adult worms in the pulmonary arteries. These worms can cause sudden blockages of blood flow within the heart, leading to a life-threatening cardiovascular collapse. Symptoms include sudden onset of labored breathing, pale gums, and dark, bloody or coffee-colored urine. This condition is often fatal without emergency surgery to remove the blockage of heartworms.

Heartworms can also be found in other organs, including the eyes, central nervous system, peritoneal cavity, peripheral vasculature (veins and arteries not in the chest or abdomen), and skin. Additionally, heartworms may induce glomerulonephritis (kidney disease) and proteinuria (protein in the urine) as a result of antigen-antibody complex deposition. As heartworm disease progresses, pets may develop heart failure and the appearance of a swollen belly due to excess fluid in the abdomen.

The American Heartworm Society recommends all dogs be maintained on year-round monthly preventative and annual testing. Puppies should start heartworm prevention as early as the product label allows but no later than 8 weeks of age. All heartworm medication — whether topical, oral or injectable — eliminates both the larvae deposited by the mosquito as well as the stages that develop in the dog. Heartworms mature in as little as 51 days to the adult stage at which time the preventative medications will not work — they only kill the larvae, not the adult worms. This is why it is important that preventative medications are given on a strict schedule: monthly for the oral and topical treatments and every 6 or 12 months for the injectables.

Reported owner compliance with veterinary recommendations for continual, year-round, monthly, scheduled administration of preventative medications is about 50%. But while efficacy is high for these medications, resistance has been reported and the efficacies against resistant heartworms may vary across products. Therefore, all dogs, including those on heartworm prevention, should be tested annually. In areas of the country with high incidences of heartworm, dogs should be tested twice a year.

If your dog tests positive, there are treatments available to kill the adult worms. You’ll want to confirm the diagnosis, stabilize your dog if they are showing signs (e.g. difficulty breathing), limit exercise, and work with your veterinarian to determine the best treatment plan. 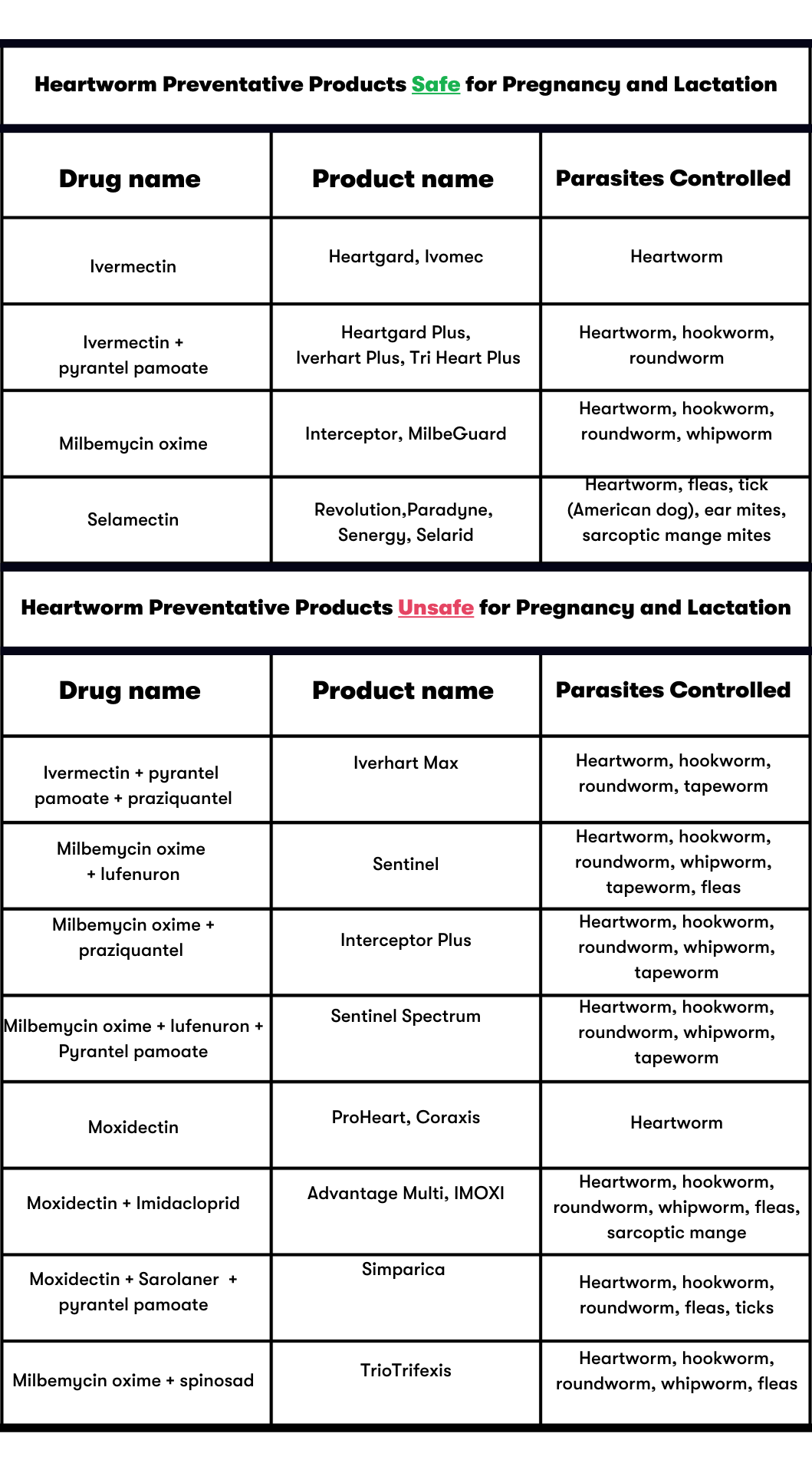 FDA: Keep the Worms Out of Your Pet’s Heart! The Facts about Heartworm Disease